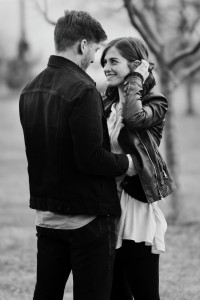 Jake met Sarah two and a half years ago while attending Colorado State University (CSU). Sarah had just returned from studying abroad in France when they Postsfirst met.  Sarah was actually there to meet his friend and he was there to meet her friend. They both dated each other friends for a while and then broke it off.  Jake sort of always had a little crush on Sarah. Over winter break, Jake, Sarah, and one of their friends went to Washington D.C.  While on the trip, Jake’s 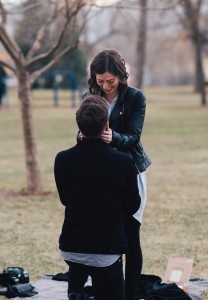 feelings grew stronger for Sarah. One night at Fort Lee, Virginia, they were hanging out on the lighthouse. He was looking at Sarah and thought to himself “She is the one!” Jake did not know how to approach this because he did not want to ruin their friendship. On the way back they stopped in Nashville on January 7. Throughout the night he finally thought, this was it.  He had to know if she was feeling the same way. Jake finally got the courage to tell her how he felt and it was not a surprise she felt the same way. They stayed up all night talking.

Jake came into Luisa Graff Jewelers in August with Sarah’s great grandma’s engagement ring.  Sarah had suggested many times that she loved that ring and he wanted to do something special for her. Jake’s original plan was to refurbish the ring and use the diamonds from the ring, but he decided due to the condition of the ring, to make a replica of the ring.  Jake knew that Sarah was unique and loved the vintage look.  One day on the drive back to Fort Collins, he asked Sarah about the different type of gemstones she liked.  She had mentioned that she did not really like diamonds and that she liked pearls instead.  The moment she said, “pearl” he thought, “nailed it” in his head.  By this point, he had already changed the design of the ring to a pearl to bring her uniqueness into the ring.

Thank you, Jake and Sarah, for letting us share your story! Luisa Graff Jewelers is excited to have been a part of your big day. Congratulations! 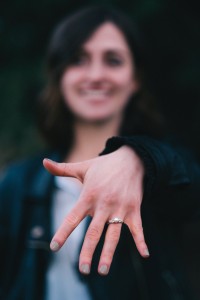