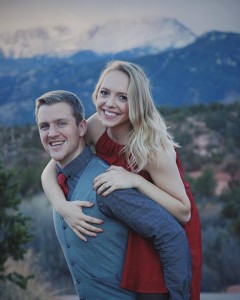 Coleman and Heather met here in Colorado Springs while running at the Jack Quinn’s Tuesday Running Club and eating two dollar pizza at Old Chicago’s. Heather is originally from Washington, but moved here after working at a summer camp here in Colorado Springs. Coleman is from Chicago, and moved here after visiting his brother and fell in love with Colorado Springs. They were hanging out for three months before Heather left to go to Italy for the summer, and they did not know what was going to happen. They decided to try out a long distance relationship and they made it work, to no surprise!

A couple months ago Coleman and Heather came into Luisa Graff Jewelers to shop engagement rings. Once Heather had her favorite style of rings picked out, Coleman had her go look at other items of jewelry so he could do the rest.

Coleman and Heather hardly ever have a day off together, so one night they decided they should go on a trip to Estes Park the next day for a hike. That same night Heather’s roommate asked Heather to watch the show Friends and to paint their fingernails together. Heather did not think anything of it because girls paint their fingernails all the time.

The next morning Coleman and Heather were on the road to Estes Park. When 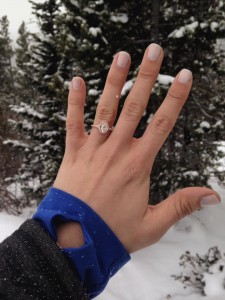 they arrived at the area they were going to hike, it was all dead and muddy, so they went into the travel center and asked where was a beautiful place to hike. The travel center pointed them in the direction of a four-mile hike with a couple lakes along the trail. About a quarter mile left on the hike, Coleman suggested they take a “selfie” over by the lookout.  While at the lookout, Coleman said “Oh look at the clouds”. Heather thought this was absurd but did it anyway. When she turned around she saw Coleman on one knee asking her to “Marry Me”. Heather was so thrilled that she could barely contain her excitement and continued the excitement by skipping back down the trail.

Congratulations, Coleman and Heather! We are so happy to be a part of your beautiful love story!