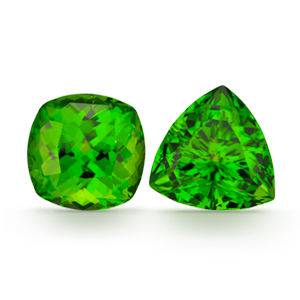 Found in lava, meteorites, and deep in the earth's mantle, yellow-green peridot is the extreme gem.

Yellow-green gem variety of the mineral olivine. Found as nodules in volcanic rock, occasionally as crystals lining veins in mountains of Myanmar and Pakistan, and occasionally inside meteorites.

The ancient Egyptians mined peridot on the Red Sea island of Zabargad, the source for many large fine peridots in the world's museums. The Egyptians called it the “gem of the sun.” Today this gem is still prized for its restful yellowish green hues and long history. Large strongly-colored, examples can be spectacular, and attractive smaller gems are available for jewelry at all price points. 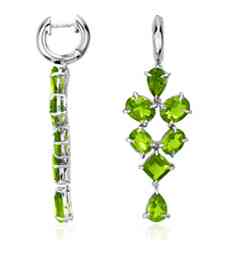 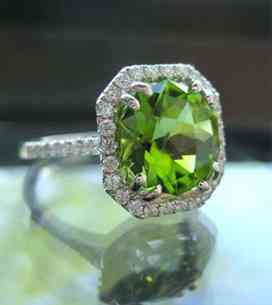 Gem variety of the mineral olivine: found in peridotite rock from the earth´s upper mantle.
Some peridot is ancient: it´s found in pallasite meteorites, remnants of our solar system´s birth.
In 2005, peridot was found in comet dust brought back from the Stardust robotic space probe.

Beautiful, yellowish green peridot has been treasured since earliest times.

Most fine peridot is eye clean. Tiny black spots might be visible with magnification.

Peridot is cut in a wide variety of styles, including ovals, emerald cuts, and cushions.

Large crystals of peridot have cut gems more than 50 carats in size.